Insuring Financial Peace of Mind, One Relationship at a Time

American Equity Celebrates 20th Anniversary by Focusing on the Future

In 1995, David Noble retired … for three days. Having spent almost half a century in the insurance industry, he noticed companies were increasingly losing touch with customers and offering inadequate service to agents and contract owners alike. He wanted to start the type of company he never saw any more. One that focused on great service and sound retirement products. Security through integrity.

Twenty years later, those same principles continue to guide Noble’s American Equity Investment Life Insurance Company (American Equity Life), which is now among the top sellers of fixed index and fixed rate annuity products in America. The subsidiary of American Equity Investment Life Holding Company (NYSE: AEL) is one of the most successful American-owned and -operated companies in the insurance industry. It has already reached $43 billion in assets and is number three all-time in fixed indexed annuity sales*. 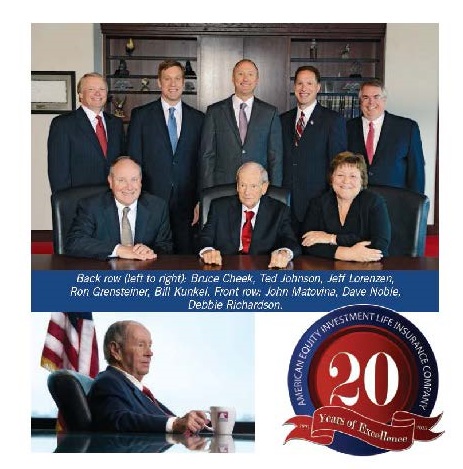 According to American Equity’s staff, that growth is a testament to its purposely conservative and highly successful approach, which they label “sleep insurance.” “Looking back, it would seem almost impossible to achieve these results in this short period of time, competing with firms that have been around for a century or more,” says John Matovina, Chief Executive Officer and President of American Equity Investment Life Holding Company. “It validates Dave’s ideals: The people and the relationships are what matter.”

In an industry where trust and relationships are essential, but sometimes hard to come by, American Equity is built on person-to-person interactions. Following the “Golden Rule,” the staff treats others as they would want to be treated, making investments with care, caution and responsibility.

This personal touch is also built into the internal corporate culture of the 400+ employees and 27,000 agents. These principles and sense of stability are manifested in an executive management team that has been together longer than almost any team in the industry.
“The character of our people has been significant to our growth and continued success in an unprecedented amount of time,” says Ron Grensteiner, President of American Equity Life. “While many preach the power of relationships, we practice it every single day. You’ll see it even in the little things. For example, when you call us, you get a human being on the phone within seconds.”

The Past Informs the Future

Although American Equity has embraced a refreshingly old-fashioned approach to values and interpersonal relationships, the group’s focus has always been, and continues to be, on the future. In fact, when Executive Chairman David Noble launched the company, his business plan was simply titled “People, Service, Future.” That’s why, as American Equity celebrates its 20th Anniversary, it will not only look to past successes to inform future decisions, but continue to strive to innovate.

Originally Posted at EMInetwork.com on 2015 by Iowa Business Leaders.