FAREWELL TO A RARE & LOVELY GENTLEMAN 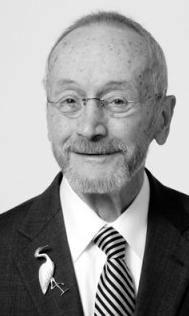 Friends of the late G. David Hurd have come up with a unique tribute for today’s celebration of his life: Wear a lapel pin.
“Dave adorned his lapels with pins,” recalls close friend Mary O’Keefe. “Some were just downright brooches,” she adds, explaining that he had two reasons:

* In quiet protest of the fact that humans are unlike most species, in which males are the more colorful.

* In support of his belief that we all have a responsibility to make our piece of the world a little more beautiful.

A longtime business and civic leader, Hurd died Feb. 6 at age 86. Today, February 16th’s events include a visitation in Capital Square’s atrium from 5 to 8 p.m., with a “celebration of life” program at 6:45 p.m. A funeral service will be Wednesday at 10:30 a.m. at First Unitarian Church; seating is limited.

Originally Posted at dsm Weekly on February 16, 2016 by dsm Weekly.

Like Jamie, Peter, and Rita, 11% of people are left-handed or are some degree of ambidextrous.