Total first quarter indexed annuity sales were just over $12.9 billion; down almost 3.0% when compared to the previous quarter, and down over 14.3% when compared with the same period last year.

“The Department of Labor’s Fiduciary Rule is imminent, and taking a toll on indexed annuity sales” exclaimed Sheryl J. Moore, president and CEO of both Moore Market Intelligence and Wink, Inc. She continued, “Insurance distributors have been so busy preparing for the Rule that they haven’t been able to focus on marketing products. Sales show it.”

Noteworthy highlights for indexed annuities in the first quarter included Allianz Life retaining their #1 ranking in indexed annuities, with a market share of 13.1%. American Equity moved into the second-ranked position, and rounding-out the top five carriers in the market were Athene USA, Nationwide, and Great American Insurance Group, respectively. Allianz Life’s Allianz 222 Annuity was the #1 selling indexed annuity, for all channels combined, for the eleventh consecutive quarter. 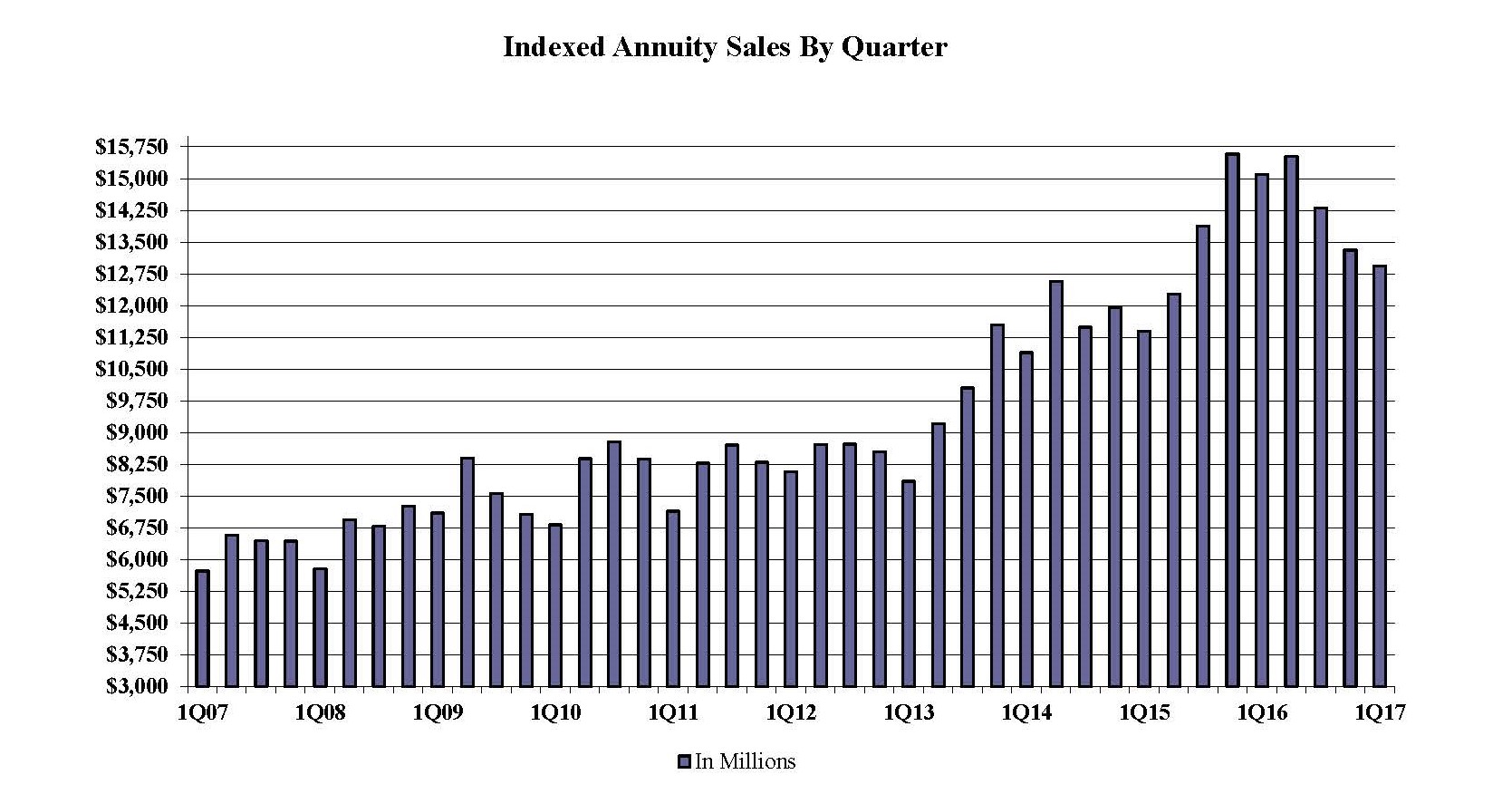 Total first quarter traditional fixed annuity sales were just over $1.1 billion; up more than 5.5% when compared to the previous quarter, and down over 6.4% when compared with the same period last year. Noteworthy highlights for fixed annuities in the first quarter include Jackson National Life ranking as the #1 carrier in fixed annuities, with a market share of 13.2%. Modern Woodmen of America attained the second-ranked position. Great American, Reliance Standard, and Global Atlantic Financial Group rounded out the top five carriers in the market, respectively. Forethought Life’s ForeCare Fixed Annuity was the #1 selling fixed annuity for the quarter, for all channels combined. 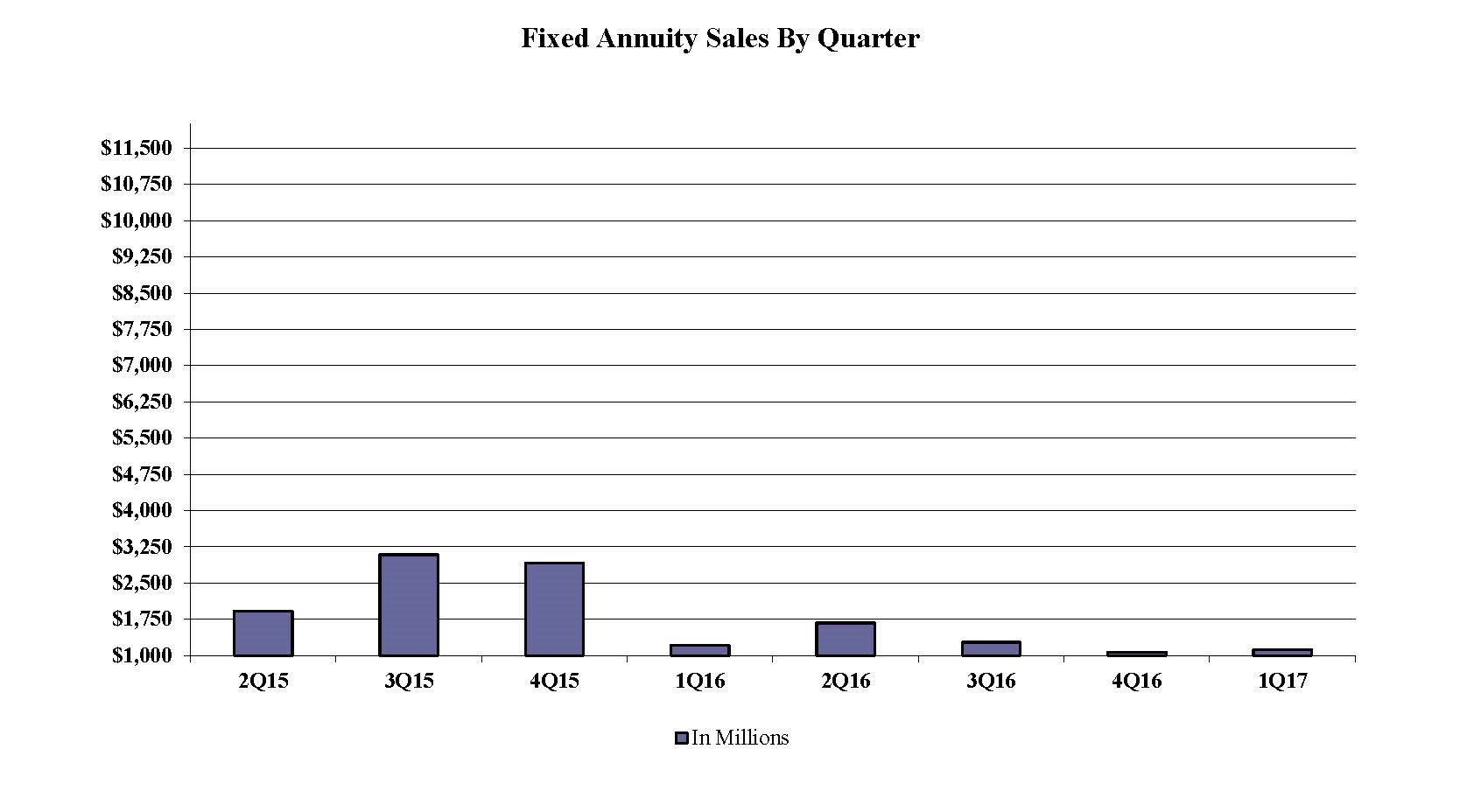 MYGA sales for the first quarter were over $8.9 billion; up more than 35.6% when compared to the previous quarter, and down nearly 16.7% when compared to the same period last year. Noteworthy highlights for MYGAs in the first quarter include New York Life ranking as the #1 carrier in MYG annuity sales, with a market share of 24.6%.  AIG held onto the second-ranked position while Global Atlantic Financial Group, Symetra Financial, and Security Benefit Life rounded-out the top five carriers in the market, respectively. Forethought’s SecureFore 3 Fixed Annuity was the #1 selling multi-year guaranteed annuity for the quarter, for all channels combined. 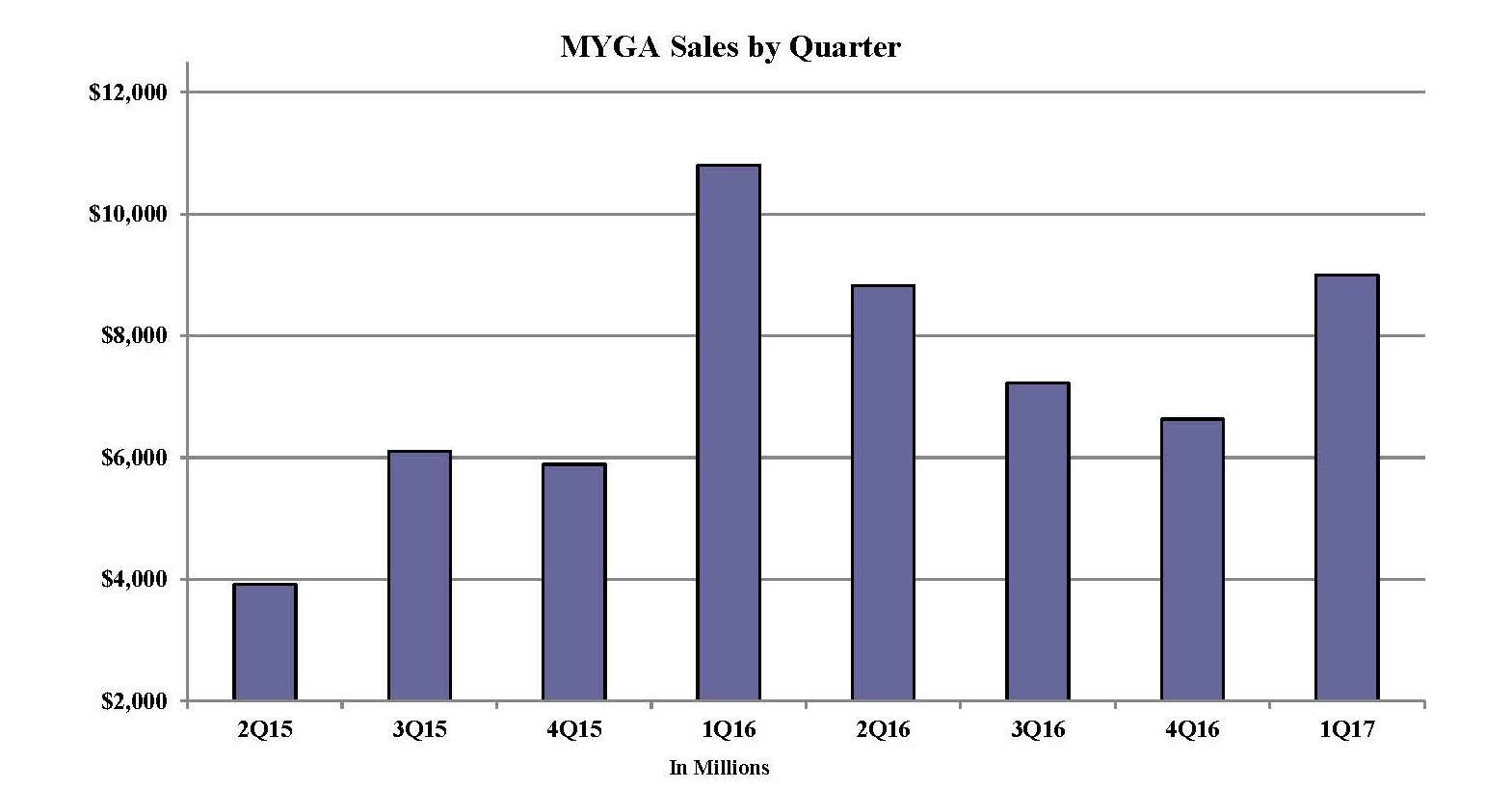 “While an increase in sales of more than 35% may seem significant to the MYGA market, one has to consider the interest rate environment” commented Moore. She continued, “Most companies experienced annuity rate increases during the first quarter, as a result of the Federal Reserve’s two increases in the benchmark rate during the same period. This directly benefitted MYGA sales.”

For more information, go to www.LookToWink.com

The staff of Moore Market Intelligence has the combined experience of nearly four decades working with indexed insurance products. The firm provides services in speaking, research, training, product development, and marketing of indexed annuities and indexed life insurance. Their knowledge in product filing research and policy forms analysis, coupled with their unmatched resources in insurance distribution, give them the expertise to provide competitive intelligence that allows carriers to stay ahead of their competition.

Sheryl J. Moore is president and CEO of this specialized third-party market research firm and the guiding force behind the industry’s most comprehensive life insurance and annuity due diligence tools, AnnuitySpecs and LifeSpecs distributed by Wink, Inc. Ms. Moore previously worked as a market research analyst for top carriers in the indexed life and annuity industries. Her views on the direction of the market are frequently heard in seminars and quoted by industry trade journals.

Wink, Inc. is the company that distributes resources such as this sales report, along with the competitive intelligence tools AnnuitySpecs and LifeSpecs at www.LookToWink.com.