Is Private Equity Bad for Broker-Dealers?

Private equity firms continue to have substantial involvement in the independent channel as they fill the void left by insurance companies exiting the broker-dealer universe.

Private-equity ownership can bring benefits to the advisor, but we also see moves by PE firms that are detrimental to the interests of broker-dealers’ advisors. Why are institutional investors attracted to private equity, and what lies ahead?

Here’s what’s happened with private equity ownership, past and present: 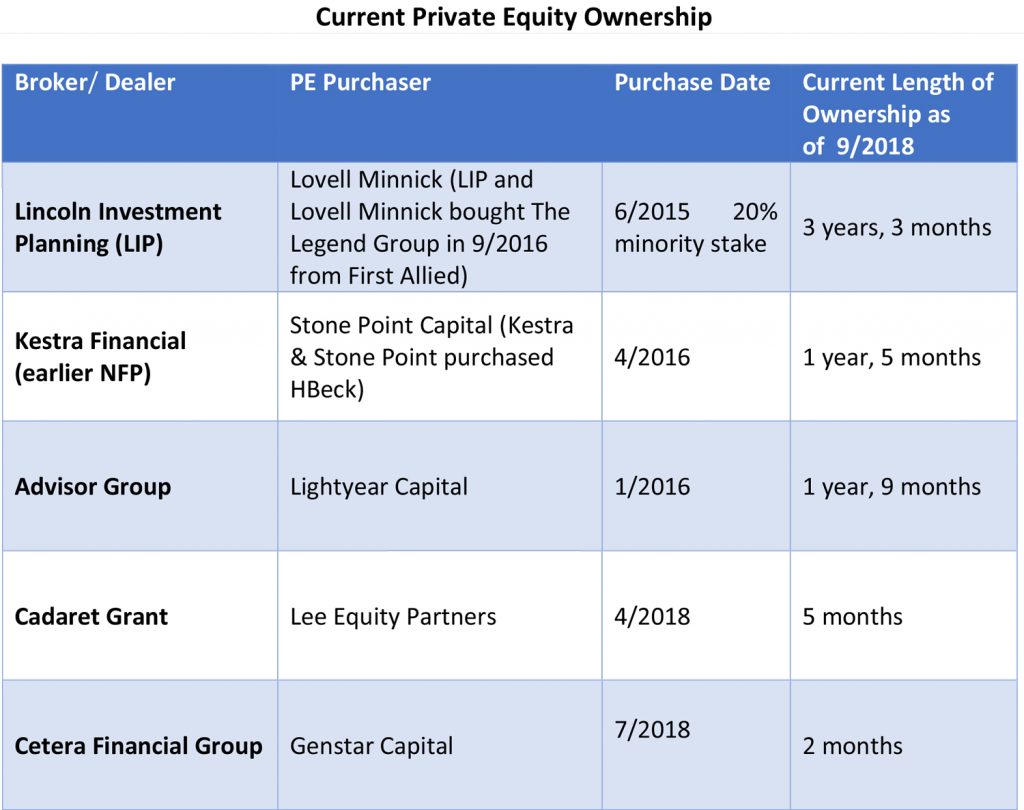 Click HERE to read the original story via ThinkAdvisor.

As the chart shows, LPL is the only private-equity owned firm to go public, with management and larger producing advisors making millions from selling their stock ownership. For all the other PE-owned BDs, divesting was the exit strategy.

NFP stood out as a particularly positive case of PE ownership, as staffing remained robust and Madison Dearborn invested $20 million into technology upgrades.

When Madison Dearborn sold NFP to Stone Point Capital, NFP rebranded as Kestra Financial. What could have been a disruption was a nonevent, with continued stable staffing and strong capital investment by Stone Point.

The sale also resulted in new growth areas such as the PWS business model, which caters to wirehouse advisors wanting to go independent, with the broker-dealer taking care of office space and staffing (entrepreneurial responsibilities that wirehouse advisors often dread).

PlanMember had a positive experience with Lovell Minnick, as the PE firm offered timely capital support during the difficult market conditions of 2008 and 2009.

With a strong 403(b) focus at PlanMember, AXA offered 403(b) products and 403(b)market penetration. Thus, a partnership with Plan Member ensued, buying out Lovell Minnick’s minority equity stake in 2010.

Lightyear Capital’s sale of the Cetera broker-dealers to RCS Capital Corp. (RCAP) has been the poster child of what can go wrong with a change in ownership.

RCAP was a narrative of a systemically corrupt corporate culture, starting at the top with Nicholas Schorsch. Advisors experienced a great deal of broker-dealer-management hand-holding via frequent conference calls and weathered a storm of disparaging press articles (largely under the leadership of Larry Roth).

Lightyear could not have known the harm that would occur months later when they sold the Cetera BDs, but therein lie the risks of ownership change.

The Cetera broker-dealers split away from RCAP in June 2016 and were purchased by Genstar Capital in July 2018.

With new ownership, Cetera advisors are hoping for blue skies ahead, but potential turbulence remains a risk in the forecast. The $1.7 billion price tag for the Cetera broker-dealers includes $1 billion of the sale being financed by junk bonds.

A rating of B3 from Moody’s Investors Service gives Cetera a high debt-to-EBITDA ratio of 7.5, as reported in August by InvestmentNews. Servicing heavy debt loads can limit investment capabilities in technology and services and potentially bring instability in a market correction as high-yield bonds behave more like stocks and less like bonds in declining markets.

Lovell Minnick’s 1 year, 10 month ownership of First Allied was an example of the downside of majority ownership by private equity vs. minority equity ownership.

Less than a month after Lovell Minnick’s ownership of First Allied, they announced a back-office staff layoff, with two more subsequent layoffs before the firm was sold in June 2013. The accumulation of staff layoffs came to approximately one-third of the back office.

The greatest disappointment with the layoffs was that much of the brain trust, which at the time of purchase made up much of the attraction of First Allied, was gone.

The Lovell Minnick experience of PlanMember was a positive one, but Lovell also had a minority interest in the broker-dealer while the majority stake in First Allied gave them the ability to be a bull in a china shop in terms of back-office staffing levels. This was a textbook, cost-cutting financial engineering PE story.

Why the Surge in PE Activity?

In Jim Grant’s May 30 interview with Dan Rasmussen, the founder of Verdad Management with prior work experience at Bain Capital and Bridgewater Associates, he discussed the swell of private equity activity.

“In terms of percentages of down years, private equity is actually less volatile than Treasury bonds, because it turns out that when experts do the appraisal accounting, they don’t think the market valuation has changed very much each quarter.”

In an Aug. 28 podcast by USA Watchdog, Danielle DiMartino Booth, founder of economic consulting firm Money Strong and author of the book “Fed Up,” had this to say about regulation.

“When Dodd-Frank was implemented, what Wall Street did was say, ‘Now that they are going to regulate this corner of investment banking that was the most lucrative, we’ll move all our most lucrative business outside of traditional investment banks that are now overly regulated and move to the private equity world,’” she said.

DiMartino Booth continued, “There are trillions and trillions of PE dollars in this country that are not regulated by any entity, which can cause problems in and of themselves. Nobody is looking over private equity, so in essence, the fox is back in charge of the hen house, which is what keeps her up at night. What Countrywide was in the 2000s, PE has taken their place as this new shadow banking system.”

Gauging the future of private equity appears to depend on where you think interest rates are trending. A bullish assumption of PE rests on low debt servicing costs, which does not instill great confidence, according to an article on Valuewalk.com titled “Dangerous Trends in Private Equity.”

PE firm Thomas H. Lee Partners is focusing on less cyclical growth businesses, which are better positioned to weather a downturn that could have a similar magnitude to the last financial crisis.

Additional caution was expressed by Frode Strand-Nielsen, founder of PE firm FSN Capital. He explained that the next five years could be a tumultuous environment for private equity and leveraged debt. This is especially the case for buyouts that featured the use of incredibly cheap debt.

If you want to delve deeper into the different kinds of private equity and how they operate, see my Investment Advisor article  “Is Private Equity IBDs’ Savior or Sorcerer?”

Originally Posted at ThinkAdvisor on October 15, 2018 by Jon Henschen.